Can A Gold Coin Be Worth More Than Its Weight In Gold?

Yes, a gold coin can be worth many times the weight of the gold.

While most gold coins are “common” and valued purely for their gold content, some gold coins are collectable or rare and have an additional value that can be many times in excess of the gold weight alone.

This rarity can be in older gold coins that are more scarce, gold coins produced at particular mints, years when far fewer gold coins were minted, and ancient and historic coins.

We’ll look at this in more detail below.

How Can A Gold Coin Be Worth More Than It’s Gold Weight?

The most obvious kind of gold coin that can be worth much more than the weight of the gold alone would be in historical or ancient coins.

These can be over a thousand years old and come from ancient civilisations like the Romans, Greeks, Egyptians, the Seleucid empire, Pontic kingdom, Macedonian empire, etc.

Obviously over hundreds or thousands of years these coins have been lost, been melted down and turned into the new currency of the new empire or ruler, or even turned into jewellery or other precious objects.

This means that these coins have become more and more scarce, and coin collectors (numismatists) will pay a hefty premium on the gold content alone.

How Much Is A Gold Coin Worth?

The main one is investors who want to have some of their assets in gold, and in this case they want common, readily available gold coins and want to pay as close to the gold weight value as possible.

The second market is coin collectors who want the rarest, most difficult to obtain coins that are very scarce, and in this case these coins are worth way more than their weight in gold alone.

For example a Justinian II Gold Solidus of Christ coin weighing just 4.2 grams was recently on sale for over $9,000.

It therefore pays to be careful when selling gold coins to make sure that you are not selling something rare for only it’s weight in gold, when it could be worth many times the weight of the gold alone.

How much a gold coin is worth depends on the coin and it’s rarity, the weight and purity, and if it is a common bullion coin its value will change on a daily basis since its value is determined mainly by the value of gold at any given time.

How Do I Know If My Gold Coin IS Worth More Than Just The Weight Of Gold?

If you have a coin that you recognise like an Eagle, a Krugerrand, a Sovereign etc then it’s pretty straightforward.

Most of these coins are worth the weight of the gold, but there are some rare years, etc, there is a list below.

If you have a very old gold coin, or an ancient one that you don’t recognise or can’t identify then you need to do some careful research.

You can look online at coin guides and dealers to see if you can find something similar, and another great idea is to contact specialist auction houses that deal in rare coins.

Do not contact just one or two of these dealers or auctions, make sure that you contact as many as possible, sending them a detailed description of your coin / coins.

Include the diameter, height, weight (in grams), and high resolution photos – a kind of press pack for each coin.

By contacting as many dealers and auctioneers as possible you can make sure that you are getting genuine, fair value prices, opinions, and advice.

DO NOT just take it to a local jewellers, pawn shop, or antique dealer – get as many opinions as you can.

Many modern gold coins have not been in issue for a very long time, and so there are not really any rare years or variations, whereas the Sovereign has been in production for over 200 years. 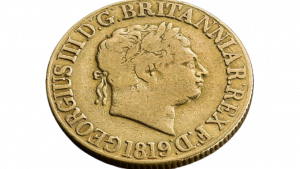 The British gold sovereign is one of the oldest and most minted gold coins in the world, so it is not surprising that there are some rare examples in there where not many coins have been produced in certain years, or other events have rendered them a rarity.

For example the 1819 King George The Third Gold Sovereign was only struck a total number of 3,574 coins, and today only 10 are known to still exist.

An interesting side note regarding the 1819 sovereign is that there is believed to be a proof version of the coin in existence, which hasn’t been seen in almost 80 years.

Other rare gold sovereigns that carry a premium to gold weight alone are:

The 1933 $20 American double eagle is perhaps the rarest modern gold coin in existence.

Amazingly while 445,500 were minted, it was never circulated and only 2 were to be kept, with the rest being melted down.

At least 20 more were stolen before being melted down, and they entered the collector market before 9 of the coins were recovered and destroyed.

It is believed 13 are still out there somewhere, only 1 is in a private collection.

This coin was bought by the collector Stuart Weitzman in 2002 for a staggering $7.59 million dollars.

Not bad for 1oz of gold, and this coin is definitely worth a lot more than its $1800 weight in gold!

So yes, some gold coins can be worth significantly more than their gold content and weight alone.

How to Value Your Gold

Menu
We use cookies on our website to give you the most relevant experience by remembering your preferences and repeat visits. By clicking “Accept”, you consent to the use of ALL the cookies.
Do not sell my personal information.
Cookie SettingsAccept
Manage consent

This website uses cookies to improve your experience while you navigate through the website. Out of these, the cookies that are categorized as necessary are stored on your browser as they are essential for the working of basic functionalities of the website. We also use third-party cookies that help us analyze and understand how you use this website. These cookies will be stored in your browser only with your consent. You also have the option to opt-out of these cookies. But opting out of some of these cookies may affect your browsing experience.
Necessary Always Enabled
Necessary cookies are absolutely essential for the website to function properly. These cookies ensure basic functionalities and security features of the website, anonymously.
Functional
Functional cookies help to perform certain functionalities like sharing the content of the website on social media platforms, collect feedbacks, and other third-party features.
Performance
Performance cookies are used to understand and analyze the key performance indexes of the website which helps in delivering a better user experience for the visitors.
Analytics
Analytical cookies are used to understand how visitors interact with the website. These cookies help provide information on metrics the number of visitors, bounce rate, traffic source, etc.
Advertisement
Advertisement cookies are used to provide visitors with relevant ads and marketing campaigns. These cookies track visitors across websites and collect information to provide customized ads.
Others
Other uncategorized cookies are those that are being analyzed and have not been classified into a category as yet.
SAVE & ACCEPT