A metal detector enthusiast in England has had the find of a lifetime.

Michael Leigh-Mallory was lucky enough to find a medieval gold coin dating back to 1257 during the reign of Henry the Third, one of only 8 known examples with most of the others in museums.

The gold penny sold for a staggering £648,000 including auction buyers fees.

Mr Leigh-Mallory only resumed his metal detecting after his children persuaded him, and found this incredible gold coin on one of his first detecting trip in 10 years.

Found on farmland in Hemyock, Devon, it has been described as the most important gold coin found in the UK in the last 20 years. 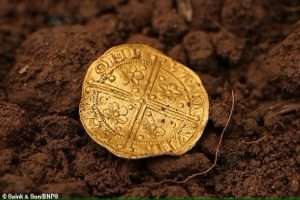 measuring just 20mm (under 1 inch) in diameter, the coin is the most valuable single coin ever found in British history.

The price the coin reached (prior to fees) was £540,000, it was sold to a private buyer who intends to loan the coin for public display.

One side of the coin depicts the portrait of the bearded and crowned Henry III on his thrown on the Great Pavement in Westminster Abbey, the other side a long cross with roses and pellets.

Amazingly while only 8 of the coins exist today, originally 52,000 were minted.

The coins specifications were twice the weight of a silver penny, and the value was 20 pence (a lot of money in medieval times).

However, as with many coins made from precious metals the value of the gold soon surpassed the face value of the coin, and so people would melt them down or “clip” them (cut pieces off the edges) since this was worth more than the 20 pence the coin could legally be traded for. 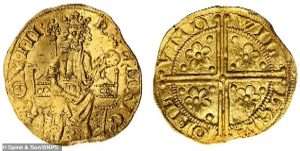 It is quite surprising that many great metal detecting finds are often made by people on their first, or within their first few detecting trips, and as in this case the first few forays for a very long time.

The usual way that detectorists get permission to detect on a farmers land is that they have an agreement, verbal or written, that anything that is found will be split 50:50 between the land owner and the metal detectorist.

If this is the case in this situation then the land owner and Mr Leigh-Mallory will have pocketed a cool £270,000 each.

Not a bad return for a Sunday wandering around a field!

Salt Bae £1450 Gold Tomahawk Steak - How Much is the Gold Worth?

Menu
We use cookies on our website to give you the most relevant experience by remembering your preferences and repeat visits. By clicking “Accept”, you consent to the use of ALL the cookies.
Do not sell my personal information.
Cookie SettingsAccept
Manage consent

This website uses cookies to improve your experience while you navigate through the website. Out of these, the cookies that are categorized as necessary are stored on your browser as they are essential for the working of basic functionalities of the website. We also use third-party cookies that help us analyze and understand how you use this website. These cookies will be stored in your browser only with your consent. You also have the option to opt-out of these cookies. But opting out of some of these cookies may affect your browsing experience.
Necessary Always Enabled
Necessary cookies are absolutely essential for the website to function properly. These cookies ensure basic functionalities and security features of the website, anonymously.
Functional
Functional cookies help to perform certain functionalities like sharing the content of the website on social media platforms, collect feedbacks, and other third-party features.
Performance
Performance cookies are used to understand and analyze the key performance indexes of the website which helps in delivering a better user experience for the visitors.
Analytics
Analytical cookies are used to understand how visitors interact with the website. These cookies help provide information on metrics the number of visitors, bounce rate, traffic source, etc.
Advertisement
Advertisement cookies are used to provide visitors with relevant ads and marketing campaigns. These cookies track visitors across websites and collect information to provide customized ads.
Others
Other uncategorized cookies are those that are being analyzed and have not been classified into a category as yet.
SAVE & ACCEPT